Striking the right balance in a post-COVID workplace 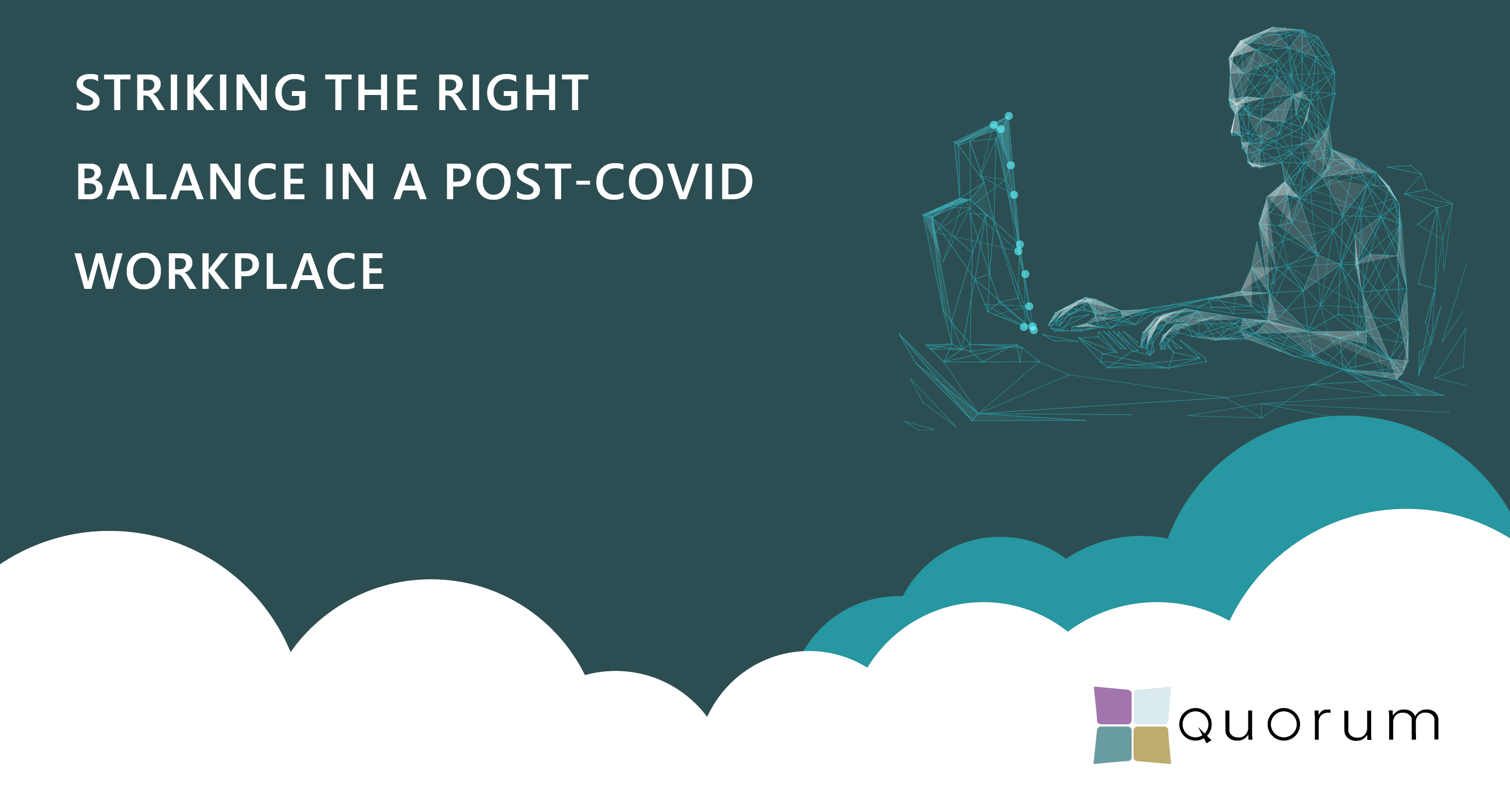 Striking the right balance in a post-COVID workplace

It’s safe to say that the ongoing coronavirus pandemic has affected every facet of our lives, including the way in which we approach our working hours. According to the Office for National Statistics (ONS), over a quarter of British employees had some experience in working from home before the crisis, but only 5% of those reported doing so on a regular basis. Thanks to the outbreak of COVID-19 and the quarantine measures put in place to limit its spread, that figure has shot up to almost two-thirds of the national workforce. Such a spike in remote working is entirely unprecedented.

Of course, some businesses were better placed to handle the sea change than others. A gradual migration to the Cloud, accompanied by the digitisation of many aspects of a company’s day-to-day procedures, has meant that many outfits were already partially equipped to shift gears and manage their operations remotely, while many others were caught completely unprepared. As a result, they have been forced to play catch-up in double-quick time, scrambling to prepare their employees with the hardware, software and technical knowhow to perform their duties even while out of the office.

There is an argument to be made that one silver lining of lockdown could be the shot in the arm that it has given to the digital revolution, and the baptism of fire that companies are currently undergoing will stand them in good stead for the rigours of the modern business world going forwards. While there are undoubtedly positives to be drawn from transitioning to a more online and integrated working environment, the urgency that has precipitated the change is a double-edged sword, since the “tech on the fly” approach adopted by some organisations may put in place good habits – but built on rocky foundations.

With the government mandating all non-essential businesses close their doors over two months ago, many companies have sought to rapidly equip their staff with the tools needed to continue working from home. The trouble is, they were woefully unprepared to do so, long before coronavirus struck. A 2019 survey found that a staggering 80% of office workers believed they did not have adequate hardware and software to perform to the best of their abilities, losing on average 2.4 hours per week at work due to these issues, with a fifth of respondents claiming to waste 3-8 hours. This amounts to a staggering 1.8 billion working hours each year from substandard technology.

If there’s one thing that COVID-19 has demonstrated, it’s that the technology certainly exists. Video conferencing platforms like Microsoft Teams and Zoom have seen a boom in their popularity, with usage surging from 10 million daily participants in December last year to over 300 million today. Collaborative tools pioneered by tech giants like Microsoft (including Windows Virtual Desktop, Teams, OneDrive and SharePoint) allow colleagues to stay in contact and collaborate from any device and in any location, enhancing the efficiency of the business model. There’s certainly value to be gleaned from adopting these tools and acclimatising your workforce to them – but the overall approach must be a holistic and integrated one.

There’s little sense in downloading different software packages that sacrifice compatibility for convenience – or worse still, allowing individual employees to engage in so-called “shadow IT”, where they use unapproved apps and platforms to carry out tasks that are not aligned with the rest of the business. And that’s even before the technical issues arise, which they invariably do when new technologies and practices are put in place. Staying competitive with others is obviously a priority, but an expedient solution should not be sought above a pragmatic one.

Besides the issue of functionality, there is perhaps the even more important subject of security. In their hurry to maintain operations and minimise downtime as much as possible, many companies may have understandably relegated security concerns to the backburner. Unfortunately, cyber criminals are not being furloughed or taking their foot off the gas with regards to new schemes and stratagems. A Czech hospital was targeted by hackers during the first days of the crisis, while distributed denial of service (DDoS) attackers attempted to extort a German food delivery company. In the UK, the government’s new track-and-trace system has been subject to phishing campaigns.

As companies move away from a centralised working location and begin to endow their employees with the capability to work remotely on a more long-term basis, it’s inevitable that unforeseen gaps in the cyber security infrastructure will appear. It’s going to be more difficult for the security team to monitor and control these weak points in the company’s online defences, while individual staff members will also be given a longer leash with regard to their own online conduct. It’s vital that any company wishing to escape the attentions of a relentlessly innovative criminal community put in place both the training and the infrastructure equipped to repel attacks.

Choosing an IT provider with security built into the foundations of their services is the best way to ensure the safety of your data and online identities. This, alongside leveraging security controls which come with leading public cloud platforms, creates a solid foundation for your IT estate. At Quorum, we pride ourselves on our deep knowledge and understanding of how to operate effectively in secure, highly governed and regulated industries, building resilient and redundant technology solutions.

At Quorum, we have many years’ experience in improving the efficiency, productivity and user experience of an entire organisation, regardless of the sector in which it operates. Our all-encompassing range of services can help catapult your company into the modern workplace, facilitating easy communication and collaboration between all employees at any given moment. We’re fully versed in all aspects of your Cloud journey from adoption to migration and optimisation and have been working with our clients to adopt cloud services since 2013. We are best-placed to help you take full advantage of the myriad benefits which a switch to a Cloud-based platform can provide.

Our intimate understanding of data and automation can help your company leverage the genuine value that both of these technologies offer – as well as the exciting possibilities that continue to unfold in the future. Best of all, we won’t sacrifice any of the performance and productivity pros for security cons; our background in Cloud based and secure infrastructures ensures that robust security measures are baked into each and every facet of your company’s IT estate.

With each of these elements available as individual projects or as part of a full managed service,  Quorum can provide end-to-end management of your IT both during these present times of uncertainty and in the “new normal” which lies ahead – whatever form that may take for you and your company.

To learn more about how we can assist your business in achieving its full potential and turning the current crisis into a springboard for future success, why not get in contact? You can reach us by phone (+44 131 652 3954), email (marketing@qnrl.com) or our online contact form. We look forward to hearing from you today.