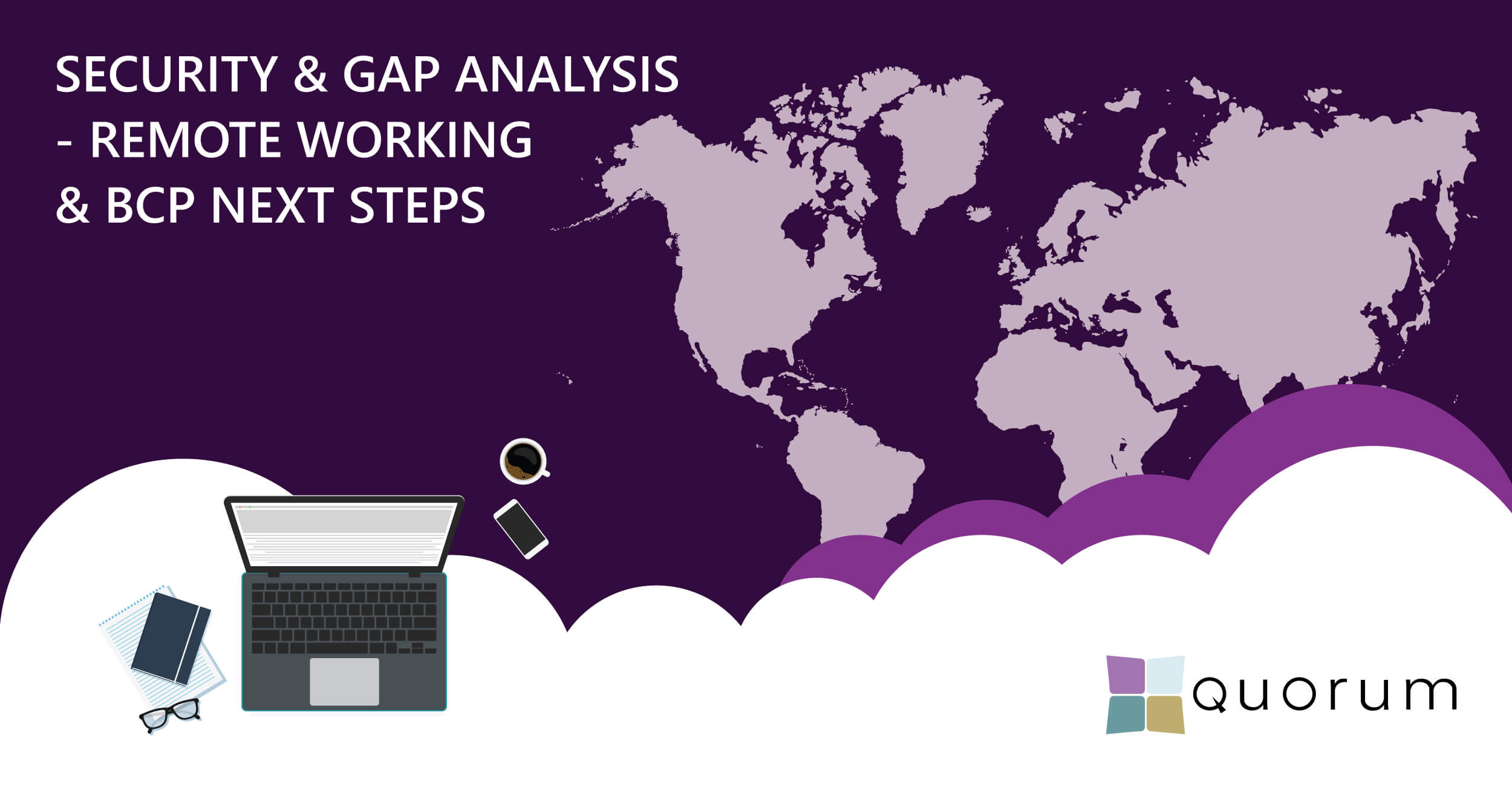 Hopefully you are all now well established in the pattern of everyone in your company working from home, although some of you may still be deploying additional infrastructure to support this – particularly if most of your infrastructure is still on-premises. However, even those that are fully leveraging Cloud services need to progress to a second phase now that your people are at home and working away successfully. You’ve invoked your business continuity plan and gotten over any initial problems, but there is still work to do to protect your company. In order of priority we have:


You can run as normally as possible in the current situation, but could you cope with a major security breach or outage on top of everything else right now? You can avoid this disruption by checking the following: a. Phishing readiness and training. We are seeing a massive increase in COVID-19 related phishing and telephony-based scam attempts right now. If your colleagues are working from home, they are not as likely to be able to just ask the person next for them for advice on calls and email, and are much more likely to fall for these sorts of scams. Now is not the time to deprioritise security training or loosen security measures. Implement this simple action plan:


b. Authentication and identity management. We are seeing an increased number of attempts to log on to Cloud services using email address and password combinations that have come from previous breaches such as LinkedIn, Adobe etc. Protect your company by:


c. Data leakage. In a bid to make home working as frictionless as possible you may have relaxed some rules that you normally wouldn’t, and this exposes you to a whole range of data leakage issues such as:

d. Malware and virus prevention. If you think that a Business Continuity event is hard, combine it with a crypto locking malware outbreak or major virus challenge at the same time. On one hand, you have fewer issues with it spreading from desktop to desktop, but on the other hand, right now you are more reliant on your back-end systems than ever. Protect yourself against the following:


Ok so now you have all of your users working from home it will probably become apparent that there are one or two gaps between what your users need now and what they have. If you don’t explain how you are going to fill them then the users will adopt their own solutions and all your good work on security goes out the window! Start with the following: a. Telephony. Hopefully you have a cloud PBX or hosted telephony solution of some sort and your users are now using a softphone as though they were back in the office. If your plan involved redirecting on-premise desk phones to mobiles, then you are no doubt experiencing some of the limitations of that such as lack of hunt groups etc. You may wish to add a small population of cloud PBX users for the affected groups and divert from on-prem to that rather than mobile handsets. Without wanting to look like I’m pushing any particular solution, Microsoft 365 Business Voice can be enabled on a per user, per month basis by a Microsoft Cloud Solutions Provider (CSP) such as ourselves. The advantage of this is you can cancel it immediately it is no longer required. b. Video and Audio Conferencing. Depending on who we are speaking to or who has arranged the meeting I’m spending a lot of times in either Zoom or Teams right now. Both are great, both are sometimes patchy depending on demand, it kind of doesn’t matter which one you pick just so long as you integrate either with Microsoft Azure AD and Multi Factor Authentication. Saying that, if you already have Teams licences why would you pay for Zoom as well? Also, the Office integration is smoother long term as Microsoft keep the products in lock step. c. File sharing. Again, you should probably already have something in play for this such as OneDrive for Business or corporately managed DropBox. The common theme to all of this is that you need to be in control of the data and authentication. MFA needs to be enforced and your data needs to be in the EU for now – not the US. You also need to make sure that your data isn’t being shared with people outside of your company without your knowledge. The one thing that you can’t allow is users picking their own solution just because they feel like it. Shadow IT is understandable when there are major gaps in your internal capability, but users picking their own products because they prefer them, presents dangers to the company that they won’t have thought through. d. Desktop access and secondary apps. Sometimes you have legacy applications that really don’t work well over a wide area network and don’t work at all over a VPN. This is very common in legal and some finance environments, and is generally due to older, niche applications not being architected in a way that has kept up with the rest of IT. Your BCP might have deemed these apps as not being essential as you can go for several days or even weeks without accessing them, but in the current situation it is apparent that a solution is needed. I’m hoping that I don’t need to say that simply publishing the remote desktop protocol directly to the Internet or even worse, allowing VNC access direct to user’s desktop is wildly irresponsible? This is tantamount to leaving a keyboard, mouse and monitor nailed to the outside of your office building! There are a number of solutions that can be rapidly deployed here, but they all need a bit of planning. The desktop virtualisation products from Citrix are the very best way of delivering a great and secure experience to users and can be deployed on-premises, in the cloud or across both. However, there is a reasonable amount of complexity in doing so and unfortunately Citrix’s pricing model doesn’t work for short-term scenarios. Allowing remote control of PCs sitting in the empty office can be a solution but needs to be under corporate control and integrated with MFA. Users deploying their own GoToMyPC is bad, a corporate deployment of GoToMyPC can be a good solution with a bit of planning. We’ve been deploying Microsoft Windows Virtual Desktop (WVD) across several of our customers to give secure access to internal desktop PCs, legacy apps and full virtual desktops to users and it’s a brilliant technology that can be implemented securely and in a few days depending on your current network readiness.
As ever, this isn’t a complete list and there will always be company specific pain points to deal with. Hopefully this has given some of you some food for thought and ideas for staying ahead of the game in this challenging time. As always feel free to get in touch for a general discussion on any of this or to talk over any of the specifics.