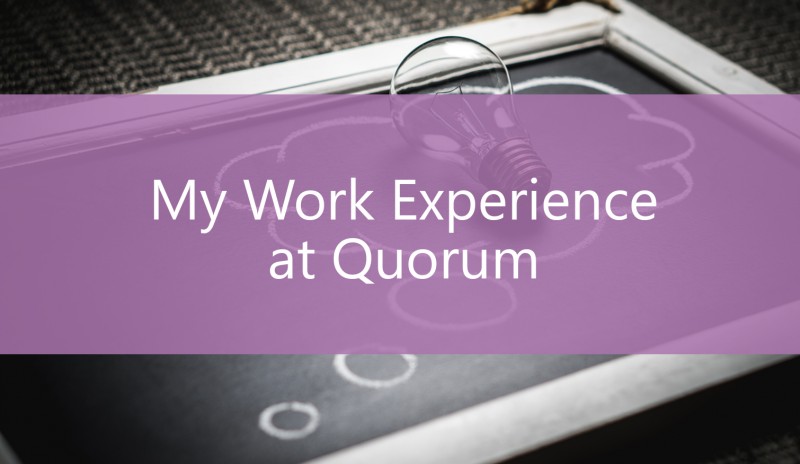 My week at Quorum by Abbie Mooney

My week at Quorum by Abbie Mooney

My week at Quorum

My name is Abbie and I am currently in S4 at High School. In School one of my favourite subjects is Admin. In S4, S5 and S6 my school encourages us to do work experience. We had the choice to either find a place ourselves or do it through the school. My mum works at Quorum Networks and thought it would be a good opportunity to see the different roles within a business and what they need to do to run a good business. When I got the email back saying that I could do work experience I was so excited and so grateful that they had allowed me to come here.

On the 19th of February 2018 I had my first day of work experience, I was very nervous and not very confident. I got the train in with my mum so she could show me where to go for the rest of the week. As I entered Quorum I was met by Katy, who very kindly took me upstairs to meet with the Operations team. I then met Megan, my mentor for the week.

Megan went through what Quorum does and how Operations has a big part in different roles within the business. I then signed a Non- Disclosure Agreement and was given a timetable to see what I would be getting up to during the week. I was taken on a tour of the building and shown where everything is and where everyone works. In the afternoon, we went through filing and discussed how it is all backed up.

I then met with the Operations Director who further explained the roles of Operations in different departments and how without Operations none of different departments would be able to work. In the afternoon, Kim told me about her Operations journey and how she joined Operations through an Apprenticeship. I found this very interesting as I am interested in doing an Apprenticeship when I leave School instead of doing Further Education. I really enjoyed my first day at Quorum, everyone is so lovely and friendly and I really appreciated it as I was very, very nervous.

On Day 2 I went to a client with my mum which I really enjoyed. I met David, Jordan and Jamie who showed me the ticketing process, and how people send in a ticket to them if they have a problem and then one of their team members goes and helps them. This was very fun as I got to go and see what the problem was and how they would fix it.

David, who took me through his apprentice process, told me that he started off by doing little jobs and just by watching others he learned more and more about the company and started working for them. His original career path was going to be something about music but his friend worked at Quorum and suggested he should do an Apprenticeship, so he did. He then told me that Quorum was a very good company to do it with as they look after you and help you with any issues that you have.

Going to Lindsays gave me a better understanding of what people do at a client site. I went back to Quorum in the afternoon and then talked to Olivia who checks contracts.

She showed me all the different contracts and what they all meant, I was very interested in this as I didn’t realise that there were so many contracts and they all had different meanings. Katy then talked me through being a Project Manager and all the things they must do such as tracking when computers and telephone lines etc. are due to arrive to a client site.

I was very tired, I thought that it would be easy doing 9am-5.30pm because I do that sometimes on a school day for extra study, but I suddenly realised that it wasn’t going to be as easy. Louise took me through the PES process which was the background checks they have to do with people before they are allowed a job. They have to go through all your personal details like where you live, if you’re allowed to work in the UK and if you are in any debt. I didn’t realise that there was such a long process before you start working. I then spoke to Lisa in the Managed Services Team who showed me where some of the clients were based and explained that not all their clients are close to Edinburgh.

Later, I was taken upstairs to meet the Developers where I met Blair who talked me through the process of how they use coding to create different Websites. A Website that they are currently working on is something that makes sure that emails aren’t a scam or won’t cause any problems with their systems.

Jackie met with me to discuss recruitment and how they do it through different websites and how they hired her instead of paying other people to do this job.

I was then met with the other Jackie who discussed Enterprise and what her role of Enterprise is as an Account Manager.
Gordon who has the same role title as Jackie talked me through what his role is but does a completely different job in some respects. I thought this was very interesting.

Finally, I met with Pamela who spoke to me about Marketing and how she updated the Quorum website to make it look better and how she makes flyers to advertise Quorum.

Today is my final day and so far, this morning I listened to a GDPR Webinar which is a new system which is being put into place for individuals to have better control of their personal data, in the afternoon I spoke to Richard about Corporate Sales.
I have really enjoyed my time at Quorum learning about all the different departments and I am so thankful for everyone who took time out of their job to speak to me, and everyone who made me feel more comfortable throughout the week.